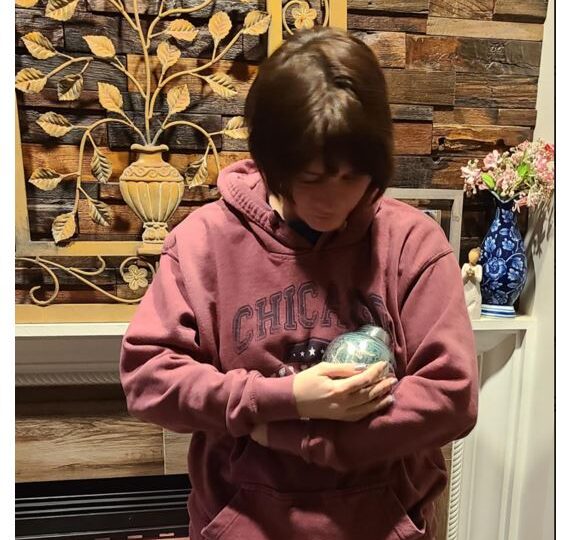 After I left the hospital I don’t remember much. I do know that when I got home I took Nyquil to sleep and went to bed.

A little after midnight my phone rang – it was the hospital to let us know that things have taken a turn and we should start heading down. When I hung up I told Albert it was time to go say goodbye to our son. I called my parents to let them know.

When I got up to get ready, I was drenched, at the time I thought it was sweat. It didn’t dawn on me until a few months later that I was drenched in breast milk. I hadn’t pumped all day the day before and must have forgotten when I got home. Going through postpartum without a baby is excruciatingly difficult and a topic for another time.

I drove us to the hospital, again not really remembering much of the drive, just going through the motions. My parents arrived at the exact same time we did.

When we got to his room they had curtains set up outside in a square for privacy. There was a cart full of juice, water, grapes and other snacks.

As we walked into his room the nurses were manually keeping him breathing.  I guess that was better for him than using the ventilator, they explained why but I was over listening to a word they had to say to me.

I sat in the reclining chair that I had sat in with him so many times to feed him, hold him or just sit next to his bed. It took a team to bring him over to me. They had to work in unison to ensure they kept the equipment just right to keep him alive long enough for us to say our good byes.

After a few moments a nurse came to take him from me. As she did she said “I’m going to get him cleaned up and put him into the outfit”. The four of us went out to the curtained area and sat there for a very long time. I remember just staring at the grapes on the cart. I remember wishing I was in the room with him. I remember wishing for so much that I knew would not happen. I also remember thinking why the hell do they have it set up like a reception.

Finally, the young female nurse came out and said “he is ready and he looks so cute” while smiling. I remember wondering if they call in this nurse specifically for these situations. Was this her specialty?

Going back into the room was first time I would see Theodore in clothes. And he did, he did look cute.  He also looked peaceful. I put my arms on both sides of him and laid my head down on his belly. I whispered all the I’m sorrys I could and said goodbye.

I honestly, don’t know what Albert, my mom or my dad did while we were there. I do remember we had to pack everything up from the room. How ridiculous that felt and annoying – here our son just died and we were worried about stuff.

Albert drove us home as I slept. A few weeks later Broken Wings by Mr. Mister played on Alexa while Albert was cooking dinner.  I went over to the stove to check out the progress of dinner to find him crying. When I asked him what thought was causing his tears, we learned early on not to ask what’s the matter? That was a stupid question but ask what thoughts caused the tears, Albert told me that this song played on our way home from the hospital and internally Albert referred to it as his son’s song. When you really listen to the lyrics it fits perfectly.

*In the picture I am wearing the sweatshirt I wore the last time I held Theodore. I love this Chicago sweatshirt I bought at O’Hare International Airport in December 2019, one of the second to last business trips I took while carrying him.*

One thought on “I Am So Sorry”