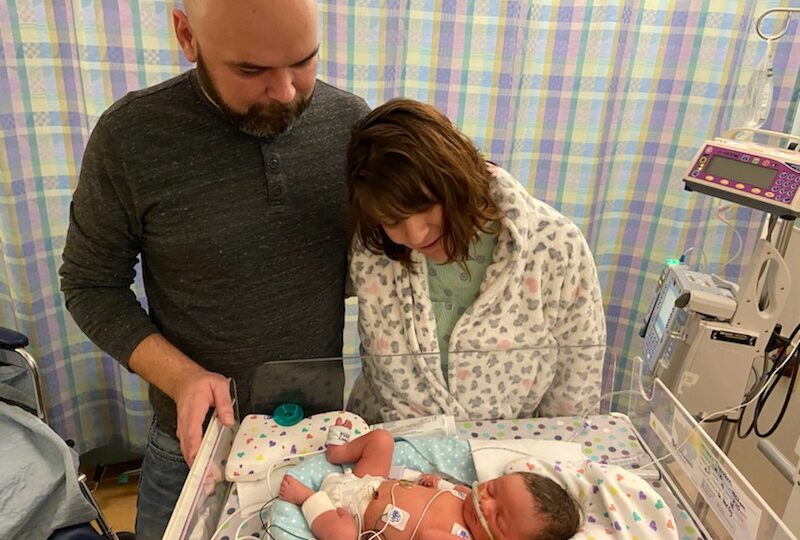 I woke up on this day to bad lab results written on the “mommy communication board”, that’s what the night nurse the night before called it. For the last few nights I would wake up multiple times in the middle of the night asking for updates – there were a few labs we were watching. Thursday night the nurse said she would communicate these numbers on the board.  That morning, as soon as I saw the numbers I walked out to the nurses station and said “those aren’t good”  feeling deflated. All my fighting energy was gone, all the nurse said was “we are monitoring him”.

I then went over to Theordore to say good morning and do the exercises the nurses taught me. At this point he was retaining so much fluid that he was blown up and unrecognizable. As I was standing over him talking to him I noticed right away he didn’t look like he did the night before – his color was starting to turn gray. I again went over to the nurse and told her what I thought her response was the doctor was on his way.

On Wednesday night, Albert told me that he had a low grade fever and a cough, so he was unable to come back to the hospital until he was over what he had. My mom and sister came to be with me this day. When they arrived I kept repeating “he is so gray, this can’t be good”. So much happened in the last few days of his life, I remember it all well yet not at all. So much of it haunts me. Being a NICU parent is hard, you see things and hear things that no parent should have to. What our beautiful little boy went through breaks me. This is why I haven’t written about it until now, even now I can’t bring myself to go into details.

When the doctor came into Theodore’s room I immediately went over to him and asked why he was turning gray – I will never forget the doctor saying to me “is this not what he has looked like? since I am new to his case I am not sure if this is normal for him”, my heart sank even lower, for the doctor to think that this gray color could be normal infuriated me.

The whole week all the doctors could tell us was our son had a perplexed case of NEC. These health care professionals were PERPLEXED! I struggled trying to understand how they could fix something they didn’t understand and well turns out they couldn’t.

I was up all night last night thinking about this day. I kept coming back to sitting with my mom and sister in the family room while Theodore was in his final surgery. While we sat there my mom and sister were doing a puzzle. The puzzle was Disney but not a movie theme – it was Mickey dressed like a Chef, with Goofy and Donald. One of them was on a bike with a basket full of baguettes. I got the impression the three of them were in Italy.  This is an example of being in the NICU with a critically  ill child – you go to the family room and do a puzzle. For a while I was angry that we sat and did that puzzle while my sweet boy was being operated on. I was so angry that we were doing something ‘fun’. After a year of thinking about this, and most of the thinking was done last night, I realized we were doing what we had to do to survive that moment and I should let go of the anger.

Late in the afternoon one of the doctors came into the family room to get us. I knew the news wasn’t good because after the other two surgeries we were given an update right in the family room, this time they asked us to step into a room that required a key. We all sat around a conference table with Albert on speaker. One of the doctors started drawing a picture of what they had discovered. The NEC had spread and destroyed more intestine which meant more intestine had to be removed leaving it an “island”, at this point we were told it really is 50/50 chance of survival. There was one doctor across from me, when we made eye contact I saw it on his face how dire this was.

What I did next I will always regret and always hate myself for. I made the choice to go home to be with Albert rather than stay and be with our son. Out of everything that haunts me this is the most painful. Why I didn’t ask Albert to make the commute to be with us. That thought didn’t even pop into my head.  I regret that we didn’t spend one last night as a family.

After the meeting, I walked into my son’s room, which I wasn’t even going to, I was about to just leave without saying anything. I am thankful that last minute I decided to go.  When I got there I put one hand on his soft hair, the other held his little hand and I told him – “Tek, mommy loves you. Mommy loves you so much. You don’t have to suffer anymore, it’s ok.” Before leaving him, I sang the chorus of On Eagle’s Wings.