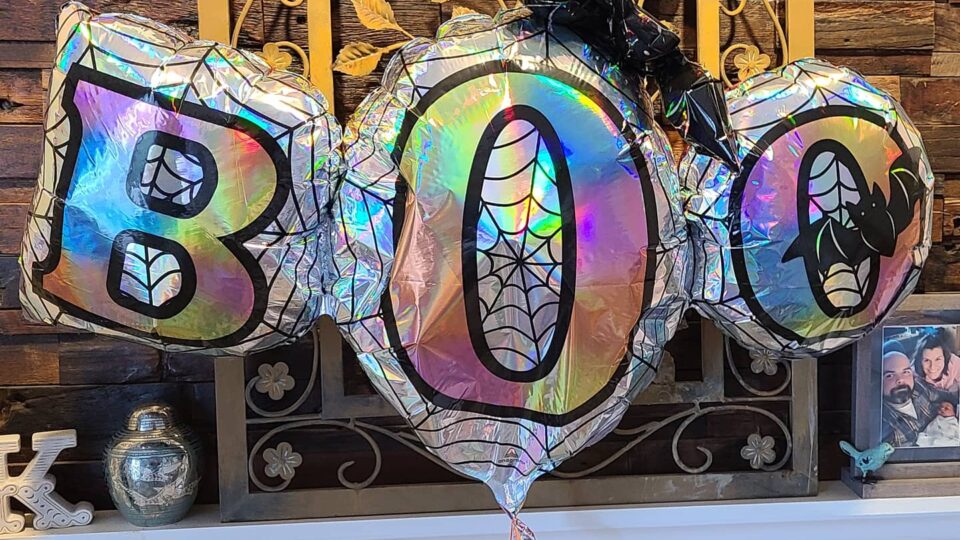 For Halloween, I bought a BOO balloon that was shimmery. I placed it at the front door so trick or treaters knew we had candy. When Halloween was over I put the balloon by the fire place where our son’s urn sits.

Even when your baby is dead you try, you try very hard, to come up with ways to incorporate their presence. I have been trying to come up with traditions we can do each year for him. Since I love balloons, I love the idea of getting one for each holiday or special event.

This past weekend we went to the grocery store for groceries and a Thanksgiving balloon.

There were two balloons I was deciding between- one was cream color with pumpkins and leaves surrounding Happy Thanksgiving shaped like a square. The string was a shimmery orange ribbon which I really liked.

The other was a GIANT turkey. I was talking to Albert about which one to get. Yes, I was dwelling on which balloon would be best to get my son, who isn’t even here to see it. As we discussed Albert said the turkey was too big and I said I think Tek would love the turkey. Just as I said that, over the intercom someone said “gobble gobble”. I grabbed the giant turkey balloon and said “I’m going to take that as a sign”.

So here begins out tradition of dwelling on which ballon is the most perfect for our son.

A tradition I look forward to doing each holiday, special occasion and maybe even sometimes just because.